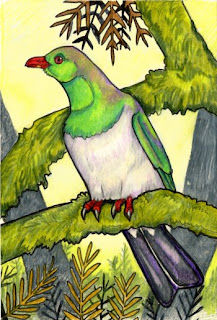 Kereru, the Wood Pigeon
Kereru is our only native pigeon (and also an endemic). He is a large fellow, and plays a very important role in the ecosystem. His preferred diet is fruit, but leaves and buds are also eaten. The Kereru is responsible for the dispersal of many of our native plants' seeds, a role he once shared with huia, kokako and kaka. As many of those species are very rare (or extinct), his role becomes even more critical. Without him, our forests could die. His own security is not guaranteed - as introduced possums share his diet and outnumber him by the multitude. Like most of our birds, Kereru have been in steady decline since the Europeans came. Still, he is a familiar sight in many areas of native bush, and can easily be recognised on the wing by his heavy body and the "whump-whump-whump" of his wingbeats. During breeding season, both birds perform interesting aerial displays, performing loop-de-loops with stalls and dives. The nest is a thrown together platform of twigs, on which one long, slender egg is laid. The hen incubates during the night, and the cock by day. When the egg hatches, the chick is fed on a "crop-milk" formula, which is a thick, cheesy mixture secreted from the crop wall. As the chick grows, regurgitated food forms a more significant part of the meal. Kereru have traditionally hunted, but now have full protetction, as some Norwegians found out earlier this year. 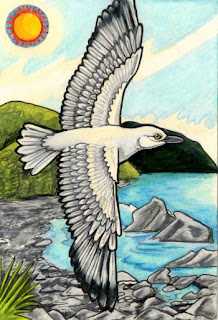 Black Billed Gull
Probably the least striking of our three gull species, the black-billed is included as part of this collection because it celebrates ENDEMIC status - meaning it is found nowhere else in the world. It also does not seem to have a Maori name, despite this fact. Smaller than its red-billed cousin, it has a more slender build and is rather less raucous in nature. Unfortunately, these traits have all lead to its classification as an endangered species. Like too many of our species, it is declining (a condition not aided by a recent massacre of 100 birds in a Southland breeding colony) and range is limited to parts of the South and North Islands. They gather in relatively large flocks and travel large distances whilst foraging for food. Black-billed gulls are not (generally) scavengers and prefer to catch their own fish or invertebrates, as well as pecking up worms from freshly turned fields. They also like to hunt moths on the wing, chasing them amongst the tussock grasses and snapping them up. Often they will call to each other whilst doing this. During the breeding season, they flock inland, to the braided rivers in which they breed. They return to the same site year after year. After pairing off, the nest is made. This is formed of a deep depression, filled with twigs and grass. In this, up to three eggs are laid. Both birds take turns incubating and the youngsters hatch after 22 days.
These pieces will be listed on my trademe for a limited time.
Posted by LemurKat at 10:17 PM