New project time - even though I haven't *quite* finished the old one (story is edited entirely, just need to do one final read through and then submit for sample copy).

This is a Tarot Deck based around New Zealand's Natural History. I am starting with the Major Arcana and may take it further if I continue to feel motivated. It is now around three years since I completed my first Tarot deck - the Furrae Tarot.

0. The Fool
Represented by my indomitable Weka chick - Aroha. Because Aroha is awesome and begged to be included. Also because her journey somewhat mirrors the journey of the Fool. She represents the innocent, off on a wild adventure. 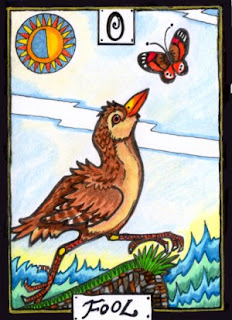 I. The Magician
Why a rabbit, you may ask? Well, rabbits have always been associated with Magicians for a start (in my Furrae deck, the Magician was also a rabbit). Also, because the Magician represents POWER. And for all that they are gentle vegetarians, no animal has altered the face of NZ as much as the rabbit (and of course the human, but he gets a card later). Without the rabbit we would never have had the Stoat, for example.
To represent the four suits we have - a chalice-shaped fungi (cups), a pounamu coin (pentacles), a lancewood sapling (swords) and a sapling of some other plant (wands). 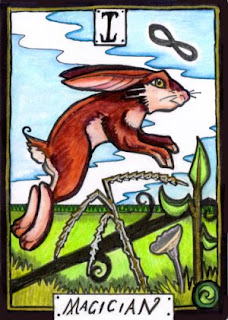 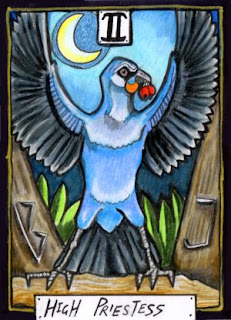 3. The Empress
The Empress symbolises fertility. So what better than the harem-breeding, gregarious and oh-so-familiar Pukeko? 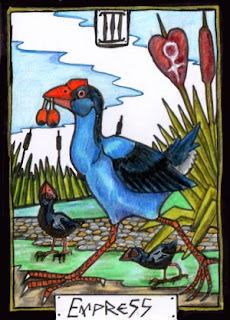 Stay tuned for more!
Posted by LemurKat at 11:34 PM