Two more images for the "Hogwarts Owl Deliveries" Swap on ATCs for All.

As a Ravenclaw student in my final year, I have been undergoing quite a lot of field research. My journeys have taken me to the hinterlands of eastern Europe, specifically Romania, where I was lucky enough to witness two unique creatures in the wild.

The first is the legendary firebird, the Phoenix. A native of Africa and the Middle East, it appears that this bird has been blown afield on its migratory route and found itself in the Carpathian mountains instead. We observed him for several days as he restocked his fuel, before watching him depart south. I hope he arrives safely. 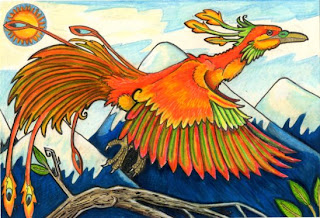 This fierce chap is the Hungarian Horntail. One of the most fierce dragons of all, this particular specimen had been recently terrorising a small Romanian village - specifically by eating their lifestock. It was our task to track him down and stun him with curses so that he could be safely transported into new territory farther from human habitation. He is weakened here, having had his fire -breath nullified and thus we were permitted to get near enough to capture this image. Shortly after he crashed to the ground, asleep, and could be safely transported deeper into the mountains. 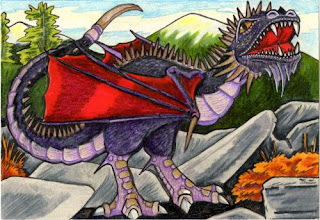