The big and the small 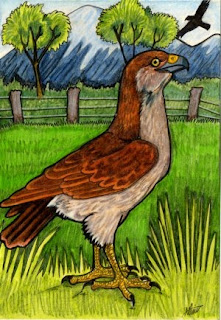 Kahu, the Harrier Hawk
Kahu settled in New Zealand a long time ago, although less than 1,000 years. It has established itself well in that time and is one bird that has truly taken advantage of the European-changed environment. Kahu are open pasture birds - they soar effortlessly on the wind thermals, scanning the ground for tasty prey. Rabbits form a major part of their diet, but they also prey on birds such as pukeko and have developed a taste for roadkill. This is probably the major cause of their death - road accidents. Another threat is 1080 poison. Nests are a low platform of bracken, manuka, raupo and flax, topped with rushes and grass. It is usually built in low swamp areas, rarely in trees. The female incubates and the male delivers her food. One report indicates that female harriers sometimes place a sunwarmed stone in the nest to keep the eggs warm whilst she soars off. But I have not found further evidence to support this. 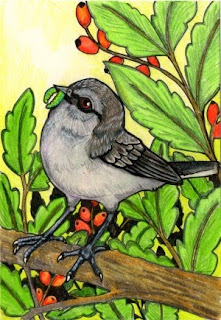 Riroriro, the Grey Warbler
Riroriro is very nearly our smallest bird. He loses out to the Rifleman merely because his tail is slightly longer. An inconspicious chap, he is not often seen but frequently heard with his long, tuneful warble emitted as he flicks through the trees. He is an insectivore an dusually hunts alone. In breeding season, he constructs an elaborate hanging nest in which his female lays 5-6 eggs. Youngsters grow fast, and she can fit in several broods a year. This is good, because after the first brood, the cuckoos arrive back in town. And she is the favourite host for the shining cuckoo. Despite the fact that the cuckoo eggs are bigger than her own, and that the chicks are huge, little Riroriro does not seem to notice the difference. Possibly she is also proud that her chick would grow so big and strong. Or perhaps I'm just anthropomorphising too much.
Posted by LemurKat at 8:10 AM