The common and vulgar... 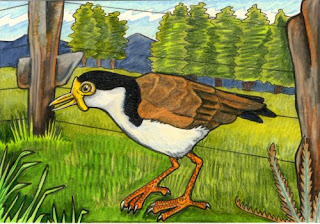 Spurwing Plover
This masked fellow was first recorded breeding in New Zealand in the 1930s. Now he's commonly found from north to south, in pastures and wetlands. He shrieking alarm call is one we have all heard, even if we do not necessarily know who made it. They moved in from Australia and have made rather a nuisance of themselves. Partly because they love large grassy areas to nest in - such as airport runways and also because they provide competition to some of our endandered endemics. Spurwings are generally found in pairs, and forage on the ground for insects, worms and small invertebrates. They nest typically on the ground, but have been known to build on house roofs too. The parents are extremely protective of their precocious young - they will divebomb intruders, tut-tut in a loud and obnoxious fashion or feign injury in an effort to deter predators. The name "spurwing" comes from a hook of bone on the bird's wing. 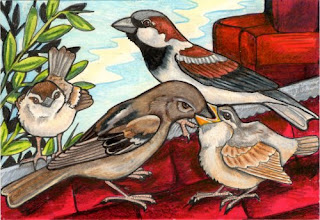 House Sparrow
House Sparrows are beautifully evolved and highly efficient and should be admired, not looked down on. Why? Because they're the avian equivalent of the human. House Sparrows originated in the Middle East. From here they radiated outwards, colonising Europe, Asia and the northern parts of Africa. But that was not enough for this gregarious bird. No, the House Sparrow wanted to conquer the world. And it has. Through stowing away on ships or being purposely introduced into countries, the House Sparrow now has earned the title of "most widespread bird in the wild." It can be found as far south as New Zealand, and also in Hawaii, eastern Australia, the Falklands (via a whaling boat), North America, South America... the list goes on. It is probably the most familiar bird to anyone, anywhere. Why is this? Because house sparrows love people. They nest around our houses, they forage our scraps, they have adapted perfectly to the urban environment.

Although their regular diet is seeds, grains and occasionally fruits and insects, they are generalist and opportunistic feeders. They're smart too - they find their way into supermarkets and shopping malls (sometimes with fatal results) and have been seen triggering electronic doors. They nest in our house eaves, and in our gardens. One pair was even found breeding in a coal mine - 700 feet below ground. They are social birds, and gather in large groups. In these groups a hierachy is established, with the dominant birds being the cocks with the blackest bibs. When feeding enmass, the birds perform a complicated switch-in-and-out dance, as I observed this afternoon. Several pieces of bread had been laid out in my courtyard. When only three to four sparrows were feeding they were skittish, often snatching a mouthful before flying away. As the number of sparrows increased, so did their confidence. The birds on the ground pecked with more dilligence and less wariness. Whilst others perched in the trees above. When these birds swooped down, birds on the ground would fly upwards. I will speculate that the birds above were keeping watch, whilst the birds below fed. At one point all the birds from below flew upwards, save for one fledgling, who continued pecking the bread. Silly chick. Luckily the cats in our neighbourhood were conspicously absent. There's nothing like engaging in a little observational biology from the comfort of your armchair!

Sparrows can breed in the season following their hatching, and form monogamous pairings. Apparently for life. Sort of. Extra pair copulations - aka affairs, are common, as is cuckolding and also bigamy. Apparently 15% of the fledglings were not actually fathered by their mother's mate. It's like an Avian soap opera. If the young cock birds don't pair off, they hang around looking after the young of other birds and probably seeking a quick fling with the hens when their cocks are away. Probably the female encourages this - if these bachelor males believe some of her chicks to be their's, then there is an incentive for them to provide. And her mate is most likely off with a neighbouring hen at any rate. They build their nests close together - I think we have a sizeable colony in our cabbage tree (my car certainly displays evidence of their proximity). Chicks are noisy and demanding, but with the pair able to hatch and raise three broods per season, must fend for themselves at a young age.

And at least they're not like the Indian mynah (possibly the only bird I truly hate) - they don't bully other birds. In fact, they're quite social and often hang out with finches. They even let a blackbird share their bread today. He was a bit nervous - one blackbird amongst about 20 sparrows (even though he was more than twice their size), but none made any move to see him off.

So there you go, next time you look at the humble sparrow and consider it common and vulgar, or possibly lewd, you might want to think again. Obviously, you're right - these are feathery little sex and food-obsessed creatures, but they're also the most succesful wild bird. And that's why.