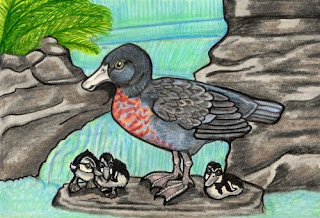 Whio, the Blue Duck
Whio is named for his whistling call (the female makes a more guttural rattle). He is a dainty blue duck that makes his home in fast-flowing alpine streams. Here he dabbles away happily all day, using his beak to flick over stones in search of tasty insect larvae and the occassional crustacean. His beak has a rubbery lip to it, cushioning it against damage and helping him scrape the larvae from the rocks. The female is smaller than the male, but both fiercely defend their territory against much larger birds. Nests are built in a hollow scrape not far from the water - which makes them at risk of flooding. The youngsters swim in the currents from a young age and can fly at around 70 days old. 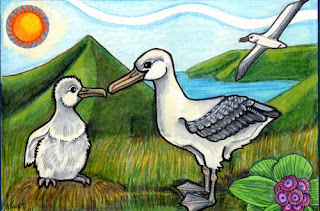 Toroa, the Royal Albatross
This royal wanderer is the largest flying bird in the world, with a wingspan of around 3 metres. In flight, they are an awesome sight. On the ground, they're not so impressive, being decidedly clumsy walkers. Of course, the albatross only comes to land to do one thing - and that is to breed. The most famous colony in New Zealand is on Otago Peninsula, Taiaroa Head, and attracts many visitors to the reserve. Whilst they're not allowed to wander around the bird's nests, their are hidden viewing hides and often birds soaring overhead. Toroa are long-lived and monogamous, returning every breeding season to the same nesting spot. One bird at Taiaroa, affectionately named "Grandma", raised her last brood at the ripe old age of 62. 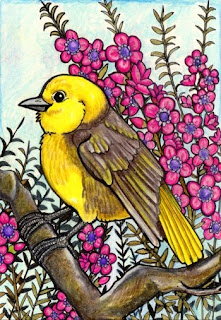 Mohua, the Yellowhead
The Mohua is a delicate golden bush bird, sometimes known as the "bush canary". But it is unlikely that you will ever see it in the wild. They are now very rare. They are small insectivores and closely related to the rather more common Pipipi (Brown Creeper) and the Popokotea (Whitehead). Found exclusively in the South Island, it is deforestation and introduced mammals that have been their downfall. Mohua nest in tree hollows, often qwuite high in the canopy (another reason you're unlikely to see them). The female is the sole incubator, but both parents feed the chicks. As often happens in hole nesting species, females are often killed on the nest by enterprising stoats or possums.