More of our vanishing treasures 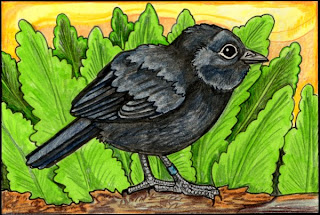 The Black Robin "Old Blue"
The story of the Black Robin is probably one of the most famous New Zealand conservation successes. This little bird was critically endangered - critically endangered to the point where only 5 remained, on Little Mangere Island in the Chathams (islands 800 km east of Christchurch).
At this point, DoC (Department of Conservaition) stepped in and managed to bring them "Back from the Brink" and how did they manage this? Well, by cross-fostering the eggs with first grey warblers (unsuccessful, the chicks died due to unsanitory conditions) and then with tomtits (rather more succesful). This left the parent birds able to lay and raise another brood. But it could not have been done without "Old Blue". You see, out of the five remaining birds, only one was a fertile female. She can now claim to be the ancestor of every single Black Robin seen today - now around 250 of them. Old Blue, is of course long dead, the average lifespan of a robin is 5-6 years, but her legacy lives on and without her, the forests of the Chatham Islands would be a little bit quieter.
Robins have the advantage over kakapo and takahe and many of our other birds "on the brink" - they're quick and willing breeders and they're able to raise several broods a year. Also, despite the lack of genetic variation, there have been no effects of inbreeding, which it thought to have stemmed through something in their evolutionary history. Perhaps even what made them black robins in the first place. 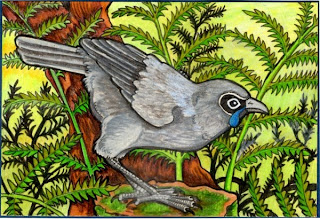 Kokako (North Island)
The New Zealand forests are truly are poorer place now that the Kokako has largely disappeared. Its haunting call is something you will always remember (you can hear it here). Sadly, the South Island species has not been sighted (or at least confirmed, there have been a number of "unverified" sightings) now for 40-odd years and is considered extinct. Once again, this species was forced to the brink by mammalian predation and deforestation and saved by DoC. Now thanks to predator control and captive breeding, they are on the road to recovery and DoC are hoping to have 1000 breeding pairs by 2020. For Kokako to find a mate, they have to sing to the same tune - and there are regional dialects, but they are quite good at adapting their tunes. They are a large wattlebird, and although capable of heavy, flapping flight (not unlike a Kereru) they prefer to hop about the trees and across the forest floor on their long, sturdy legs. They are prone to predation by ship rats and possums, especially of the incubating females, which lead to an over-abundance of males. Indeed, according to the youtube video I just watched, many of the "breeding pairs" they had sighted in the wild and were considering infertile, turned out (After dna testing) to be two males!

The Kokako is one of the few remaining large berry-dispersal birds, along with its fellow diet compatriots the Kereru and Kaka. Only the Kereru can still be found in large numbers nowadays and if they too declined it could put many of our native trees at risk too.
Posted by LemurKat at 2:11 PM