Some of our Urban Avian Acquaintinces 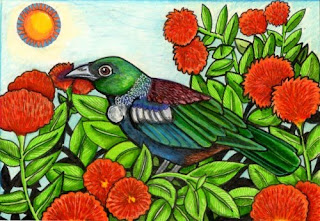 Tui, the Parson Bird
The talented tui is one of our most charasmatic birds. One of the three honeyeater species, it is closely related to the Bellbird (featured earlier). The two frequently share habitat and have similar diets. They also have similar songs. The tui, however, is more of an improvisor and creator - he likes to combine other sounds into his melody - telephones, house alarms, dogs barking etc. At least one tui in captivity has learned how to talk. Tuis used to be widespread throughout the country, but now their range is rather more limited. They still have their strongholds, however. In Russell (Bay of Islands) it seems there is a tui for almost every tree and you are surrounded by a symphony of their melodies - although it can be rather overwelming!
There are, alas, none in Canterbury anymore. But there are plans to change that. 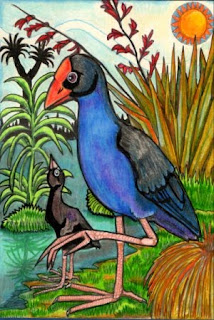 Pukeko, the Purple Swamp Hen
Ranking in at #9 last year on the "Bird of the Year" poll, the Pukeko is both loved and loathed. With their long legs, flicking white tails and stalking movement, they are both a comical and familar sight in the swampier suburbs. Often seen grazing in paddocks or by roadside verges, they are not infrequently casualties of hit and runs. However, their habit of snatching foods from gardens and damaging their crops does not endear them to farmers or gardeners. They are versatile eaters, usually resigned to eating roots and shoots and boring plant matter, they are known to indulge in eggs, ducklings, small fish and invertebrates. Pukeko form polygamous breeding groups, with several hens laying and brooding in the same nest. As this is a large, flattened platform of reeds, there is plenty of space. All birds in the group - including those from previous broods, help mind the chicks. 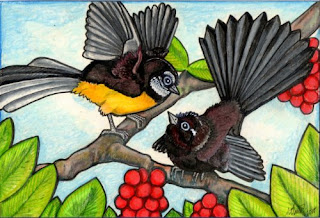 Piwakawaka, the Fantail
Ah, the fantail - one of our most endearing wild birds. Who could resist these dumpy little birds with their vast spread tails, as they tumbled through the tree branches or flicker through the air. And the way they follow you as you walk through woodland paths. How friendly they are, how amiable. Really, they're after you because you are the Great Insect Disturber. Piwakawaka is an exclusive insectivore - meaning he won't eat anything else. This can be quite a problem in the winter months, when food is hard to come by, and you may observe that there are less of these wee guys around when the weather is cold. But the ones that make it through the winter do what small birds do best - they breed. They start at a young age, raising 2-5 chicks at a time, and are able to lay (although probably not raise) up to 5 clutches a season. Chicks hatch and grow to fledglings in just under a month. Both parents feed them, and when the female starts building her second nest, dad takes full responsibility. Chicks are fed every ten minutes - that's 100 times a day!!

For a bird, they're quite short-lived - three years being the oldest recorded (although I doubt many fantails have their birthdays noted and counted) in New Zealand, although in Australia their cousins have reached double figures.

The black fantail pictured here is a relatively common genetic mutation - occuring only in South Island fantails, about 1 in 5 are born black.

And why the tail, you might ask? Doesn't it hinder them? Not at all - the tail helps them change direction swiftly (to catch that fly all the faster) , also to balance them as they hop up and down branches - sometime upside down.

So next time a little Piwakawaka visits your garden, be sure to notice what a little evolutionary marvel it is.