Gems of the New Zealand forest 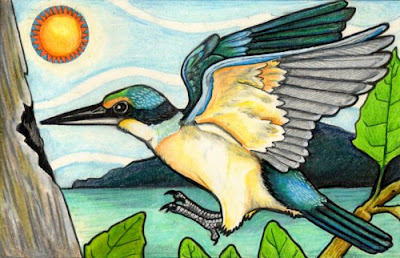 Kotare, the Sacred Kingfisher
A bright blue darting flash could mean that a Kotare is on the chase! As it slices through the water to snatch up shimmering silver fish or snatches insects from the air. Kotare are voracious hunters, and fish are not the main staple on the menu - they will happily munch on small mammals, reptiles, even other birds (like the silvereye). Kotare can often be seen roosting on branches or powerlines, watching and waiting for something tasty to come along. A group of kingfishers is known as a "Concentration". They are a hole-nesting species which they dig themselves either in a tree or clay bank. The female doing the incubating but both parents feeding the brood. They are untidy housekeepers, and their holes often reek. 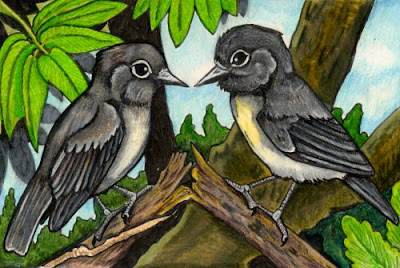 Toutouwai, the New Zealand Robin
Bearing a superficial resemblance to the English birds for which they are named, the NZ Robin is a curious and relatively fearless bird. Once they were common throughout the forests, but now thanks to mammalian predation, you have to hunt a wee bit harder to find them. They thrive solely on a diet of bugs, insects and squirmy worms, and thus like the fantail are known to hang around people. We are the ultimate bug-stirrers, after all. Like a blackbird, they fossick around in leaf-litter gobbling down anything squirmy they disturb. Robins are noisy songbirds, and are among the first to greet the day and the last to go down with the sun. They build a large, compact nest against the bole of the tree and it is a beautifully woven construct. Should this nest be disturbed and their babies killed, they have been seen to show distress, hopping around the intruder, wings quivering.

This pair are the South Island subspecies, having the yellow colouration on the belly. 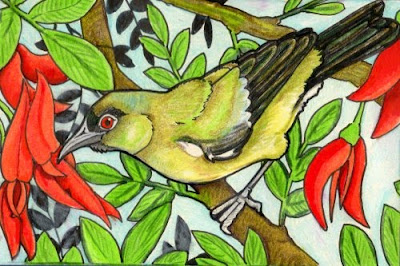 Korimako, the Bellbird
At first glance, the bellbird looks rather ordinary - a drab olive green bird with a blue and black sheen to its feathers. That is until it opens its mouth. The Bellbird's clear, chiming song has earned it its name, and given it the reputation as one of our finest songbirds. Its cousin the tui shows similar musical ability, but is more of a mimic and less crystal-clear (it likes to improvise and add its own twist). They also have regional accents - with each bird singing to a slightly different tune. Bellbirds are versatile eaters - eating fruit and insects, but their favourite food is juicy-sweet nectar. In breeding season, the female and the babies eat plenty of protein-rich insects. They are strongly territorial and in some areas compete with Tuis for food. They have also been known to bully Stitchbirds, a more distant relative. Stitchbirds are very rare, however, and it is only on offshore islands that their range overlaps. Bellbirds have been found to form partnerships with the same mate year after year.

I have put two of these 6x4 sized images up for sale on trademe.co.nz. At $20 each, they're very reasonably priced and would look delightful framed on the wall.
Posted by LemurKat at 9:03 AM