For anyone who is intersted, many of the Originals of these New Zealand bird pictures are still available for sale. They are $20 each and I am listing a couple weekly on trademe.co.nz. If you are interested in owning one, please contact me. I am also selling them as Collectible Art Card Prints (assembled by hand) for $3 each. For more details click here. 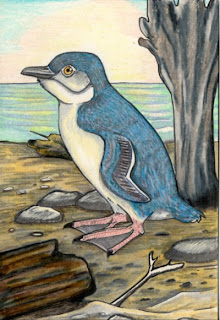 Korora, the Little Blue Penguin
This delicate blue penguin is the world's smallest penguin. He is also found in Australia and spares his days at sea. It is only at night that he comes ashore once more, and then scurries to his burrow to sleep the night away. Sometimes these "burrows" might be beneath a house, in which case the inhabitants can be rudely awoken by their loud crooning calls. Their favoured foods are crustraceans, squids and fish and they normally make dives of around 10-20m. When breeding, the Korora is known to form long-term partnerships, but these can dissolve fairly quickly. Two eggs are laid in the burrow and incubated by both parents. For the first week of the chicks' life, one parent guards whilst the other forages, but soon the demand exceeds supply and both parents must go out to sea. Chicks grow swiftly and fledge at around 8 weeks old. They do not move far though, preferring to stay in the neighbourhood where they were hatched and raised. 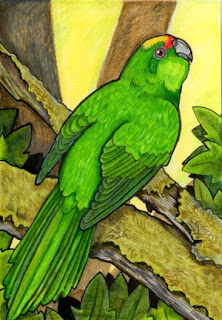 Kakariki
This fine looking parakeet is named "Kakariki", meaning "green" - specifically, HIS shade of green. There are three different species of Kakariki - most imaginatively known as the Yellow-crowned (pictured here), the red crowned and the orange crowned. For a time there was some debate over whether the oranges were a seperate species or a colour mutation of the yellows, but genetic testing has proven their status as a species. Kakariki used to be common in New Zealand forest, moving around in pairs or small groups, as they foraged for seeds, berries and shoots, flowerbuds and small invertebrates. Alas, like many of our natives, they fell prey to rats and stoats and feral cats. Now they are a scarce sight. It is highly possible there are more in captivity then in the wild, as they are a relatively popular aviary bird. In New Zealand, one requires special permits to keep them but they breed readily in captivity and have found their way all across the world. 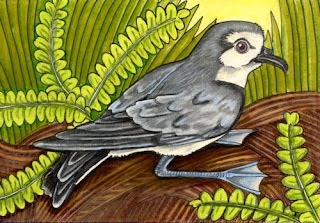 Titi, the Cook's Petrel
The Petrel is classified as a "tube-nosed seabird" and has a raised nostril tube above its beak. These improve the bird's sense of smell, and also help drain away excess salt water, exuded from a gland above the eye. Titi rarely comes ashore, spending most of his life on the wing or the waves, skimming the surface for fish and squid. Petrels have an interesting adaptation to their stomachs. They are divided into two, and the upper stomach stores the oil from their food. This oil porovides a strong energy source, and is reguigitated to feed the chicks. The chicks store it also, and if attacked in the nest, can eject large quantities at the predator making life unpleasantly stinky for them, and also damaging the natural insulatory properties of the feather or fur, which can be fatal. Like all birds, he must return to land to breed. The nesting site is a deep burrow in which one egg is laid and incubated. Tuatara have been reported to also occupy petrel's nests, but this may be at the detriment to the bird, as tuatara have an appetite for bird flesh and could easily devour the chick or egg.

"Titi" is used to refer to a number of different petrel species throughout New Zealand, including the Sooty Shearwater, or Muttonbird. Although considered a "gourmet food" this descination comes more from the scarcity of it on menus and the difficulty in catching it, NOT the taste. It requires careful preparation to take away the rather pungent, briny flavours. I've never tried it, and I'm not sure I ever would.
Posted by LemurKat at 8:17 PM