I've decided to create a new craze - NZ Naturally Collectible Cards. These are at present, strictly limited edition (limited to my printer and my laminator) but at $3 each, they're a real bargain. Right?

Basically, I'm selling ATC prints of my bird images with information on the back. Great for bird enthusiasts, art collectors, school teachers and geeky children like me*!

Here's the three new feathered friends I rustled up today: 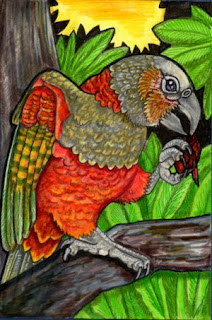 Kaka
The Kaka is the forest cousin to the Kea and although an intelligent bird, it is rather more shy in nature. Kaka were once relatively widespread in our forests, but now the South Island subspecies is very rare and the North Island one faring somewhat better. It's funny actually, that although the population in the South Island is smaller and the landmass bigger, it's the North Island that has proven the stronghold for these seed dispersal birds (Kaka and Kokako). The Kaka loves to munch on berries, and plays a very important role in the ecosystem. Alas, as a hole-nesting species, they have been deeply affected by the stoats and other introduced mammalian predators. Only the female incubates - so only the female (and chicks, if any) is easy prey. Once again, we have a disproportionate gender spread in the population. These birds are strictly hierachal, and the brighter coloured birds tend to be the top of the Pecking Order. So this fellow is most clearly a Boss Bird. 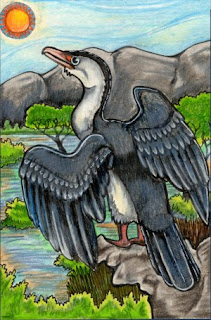 Karuhiruhi, the Pied Shag
Having already illustrated the endemic Spotted Shag, I wasn't going to draw another of these beautifully adapted fishing birds, but I did want to draw one in its typical "Drying" pose and since my eventual goal is to draw ALL our native birds, well, it had to be done. These handsome fellows prefer to hang out on the coasts, but occasionally they venture into estuaries or lagoons, as this chap here has. They are expert fishers, and lack oil in their feathers. This allows them greater diving ability (the oil adds buoyancy) but does mean that after dining, they must then sit in the sun to dry out their wings - as you can see here. 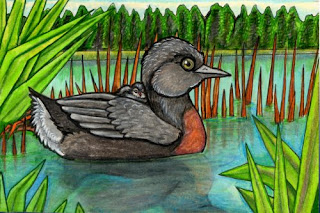 Weweia, the Dabchick
This delightful little water bird may look familar to a lot of you - it very much resembles the Little Grebes found throughout the world. But this species belongs to us, and us alone! To the North Island alone, mores-the-pity, and I guess they're not sharing. The grebe family are the speedboats of the bird world - but they've made a sacrifice for this speedy swimming ability. You see, their feet are positioned very far back, quite near the tail. This gives them maximum leverage ability through the water, but also means that they have difficulty walking. (they fall foward). For this also means that they rarely come on land, so unfortunately it would be unrealistic for me to depict their nifty foot adaptaption. You'll have to settle with a description instead. Their toes are individually webbed, making each toe look rather like a leaf. They are expert divers and make barely a splash as they dive beneath the water in pursuit of insect larvae and other invertebrates. They are so fast, that it is rumoured that if one is accidentally fired on in duck-hunting season, they can dive beneath the water before the bullet reaches them. Not something I wish to test.

One of my favourite all time birds is the Crested Grebe, their rather large and impressive cousin. But whilst I am itching to draw another one, I have refrained so far because they are one of the relatively new arrivals to New Zealand from Australia and are relatively rare. I was lucky enough to see one in the wild at lake Ianthe last week. Unfortuantely, I didn't realise that the dabchick (above) is found near Rotorua or I would have made my parents wait for hours while I tried to locate one when I went there with them two years ago.

Anyhow, here's my awesome (*coughs*) photo of a Crested Grebe. It reminds me rather of those Loch Ness Monster photos you see. Except, of course, that this one is DEFINTELY a Crested Grebe. And I had binoculors too.

Anybody got any suggestions on what bird I should illustrate next? I"m thinking it might be time to make another Kakapo.

* Obviously, I mean, like I WAS. Although I do consider myself in my second childhood. I've been obsessed with NZ birds since I was about 5. We blame my Nana, she loved birds. The book I am using as one of my references was given to me in 1988 and I still remember it as being the best birthday present EVER.
Posted by LemurKat at 11:38 PM

I was the bird geek at school too. I have forgotten more than I ever remember but I randomly watch nature shows and my son asks me "What's it called Mummy?" and I usually know, even if I didn't know I knew until I was asked :)

Have you done a pouakai?

My son quite likes pukeko :)