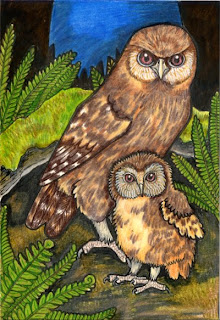 Whekau, the Laughing Owl
This is the first in the set of 12 extinct New Zealand birds I am planning on depicting. It is the Whekau, known also as the "laughing owl" because of the noise of its call, which rang like maniacal laughter. It was a relatively large bodied owl, and preferred to spend its time on the ground, rather than on the wing. It had long sturdy legs, and pursued its prey (small birds and kiore rats) on foot. Preferred habitat was open land, and it nested in limestone cliffs. This owl became extinct in the early 1900s, with the last verified sighting in 1914. However, it is possible that like many of our native birds, there is still hope that somewhere, out there, there are still some around. 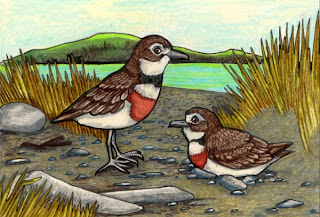 Tuturiwhatu, the Banded Dotterel
Here is one shorebird that is still very much alive. It is the most numerous dotterel species in New Zealand (although it only has two rivals) and inhabitats both the shoreline and also riverbeds. The male makes several nests for his lady to choose from - these are merely scrapes in the sand, and in her chosen one she lays two to four eggs. Both parents take turns incubating. If danger threatens, the adult bird will put on a great show of injury, dragging its wing and looking for all the world like its about to drop dead. In this manner it lures the predator away from its nest or chicks, and when it reaches a safe distance, off it flies! Favoured food is insects, crabs, molluscs and sandhoppers, fish and invertebrates. These wee birds can live up to ten years, and in winter the birds that live and breed inland take a holiday across the ditch, in Australia, before returning with the spring to begin their family anew.
Posted by LemurKat at 11:29 PM