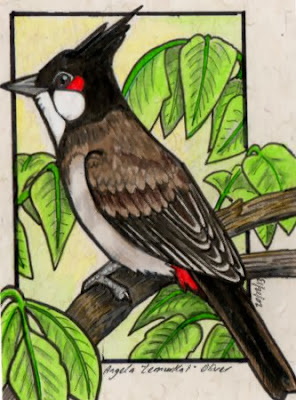 There are numerous species of Bulbul, naturally distributed across Africa, the Middle East and Asia. As relatively attractive songbirds, they have enjoyed some popularity as pets and as such have now become established outside of their natural homes. Here they have become rather a pest as many of the species, particularly the red vented, are aggressive and damaging to crops. The red whiskered fellow here is less aggressive, but has been found to carry bird malaria parasites and also aids the spread of introduced, exotic plants.

There is a campaign in Auckland, New Zealand, at the moment  - where the red vented bulbul has been sighted, to eliminate it and stop it establishing itself there. It has already been foiled in attempts at colonisation in the past, and if it did manage to breed here would quickly become a major pest that would beat up on our remaining native birds and damage our agricultural industry. The mynah bird is bad enough, it does not need any more aggressive companions.
Posted by LemurKat at 9:04 AM