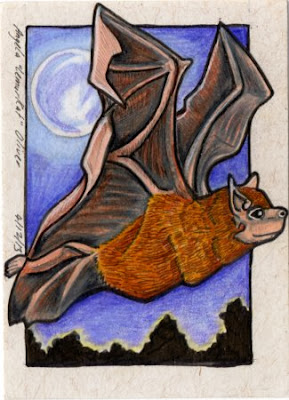 Bats are small, generally insectivorous, mammals that have evolved the ability for controlled, sustained flight. Their forearms have modified into wings - connected to their hind legs by a delicate and sensitive membrane. They are also characterised by their nocturnal nature, sharp hearing and the use of echolocation - making high pitched, ultrasonic sounds and listening for the echo - to navigate.

This fellow, the Bulldog Bat hunts for prey over water, using his echolocation to pinpoint water insects or small fish via the ripple disturbance on the surface. Then he pounces, sweeping close and snatching it up. The name "Bulldog" is derived from the fleshy skin around his face, which form cheek pouches and allow him to store food.
Posted by LemurKat at 7:30 AM