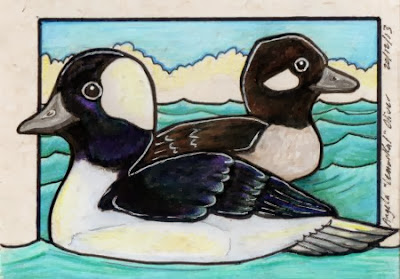 The Bufflehead is a diminutive sea duck, one of the smallest species in North America. They are highly active, diving almost continuously to feed their high metabolism. Due to their small size, they are able to fit into the nesting cavities evacuated, and abandoned, by the Northern Flicker. Pairs form a monogomous relationship and the female uses the same nest cavity year after year. The term "bufflehead" is a shortened version of "buffalo head" for the male's large head: during mating season he fluffs up his head feathers for dramatic purposes. Outside of breeding season, they form in small flocks and migrate.
Posted by LemurKat at 8:55 AM