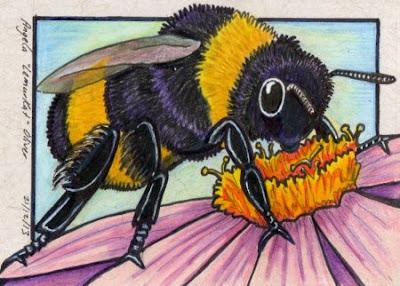 There are over 250 species of these furry bees, which occur naturally across most of the Northern Hemisphere and South America, and have been introduced to New Zealand and Tasmania. She is covered in long, branched bristles, called “pile”, which make her appear fuzzy. This pile becomes electrostatically charged whilst the bee is flying, and when she crawls inside a flower, the pollen is attracted to this charge. She also stores nectar in her crop and in specially modified concaves on her hindlegs, in which it is held in place by hairs. Unlike bees, her sting is not barbed, and she can sting multiple times.

I have once been stung by a bumblebee: it burned horribly, painfully, for several minutes, enough for me to start researching on the ‘net quite how serious they are, but faded within an hour and did not even leave a mark or swelling.
Posted by LemurKat at 8:23 AM