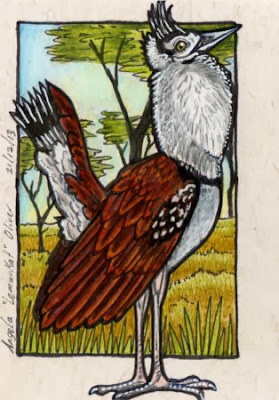 Bustards are large, heavy birds that spend the majority of their life on the ground. The male Kori Bustard, featured here, can weigh over 20kg, ranking him among the heaviest flying birds. To get airborne, he needs a considerable run-up and thus he makes his home in the open plains of Africa, where there are few trees to hinder him. To attract a mate, he puts on a fine display: puffing up his white throat, arching his head back, fanning his tail and strutting his stuff in an effort to out compete his rivals. He will mate with all willing females and plays no role in raising his offspring. The female lays her eggs in a shallow, unadorned hollow, often near a patch of cover, and rarely leaves them to forage for food. Sometimes she will cover herself in branches for additional camouflage. Chicks are precocial and forage with their mother within a few hours of hatching.
Posted by LemurKat at 7:51 AM