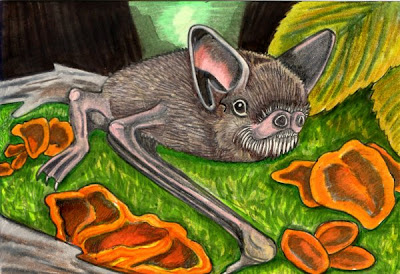 The only terrestrial mammals found in New Zealand are bats, of which there are only two species (a third now being extinct). They are small, ancient bat species weighing only 12-15 grams. Although they use sonar to fly, they spend rather a large amount of time on the ground, where they forage for insects, grubs, and also enjoy sipping nectar and pollen. They use their front limbs to scramble around on the forest floor and their wing-thumb is extended into a claw, helping them dig into rotten logs, and also to climb with some skill. Indeed, it is a relatively slow flier and rarely gets more than three metres above ground. In flight they have been described as looking rather like ungainly butterflies. During the daylight hours, they gather in hollow trees or excavated tunnels, in large groups. If the weather is too cold for them to venture out, they go into a “torpor” state in which their body limits its functions until the weather warms up. It is not as intense as hibernation. In late summer, the females form into nursery groups and the males roost separately. The males sing from strategic points to attract their mates, and the females can travel up to 10 km to make their selection. Only one pup is born per season and grows to maturity within 12 weeks.