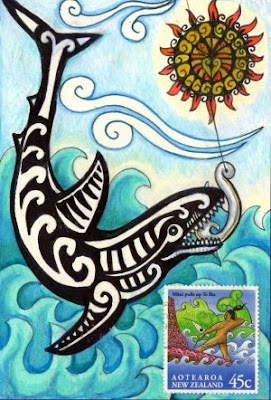 As you can see, there is some friendly rivalry between North and South! I'm a mainlander, born and raised.

Of course, the North Islanders also consider themselves maindlanders...

Anyway, a maxicard style piece I rustled up for a chap in Kuwait, who probably doesn't want it (he's a stamp collector), but hey - I'm getting my art into Kuwait!
Posted by LemurKat at 9:48 PM