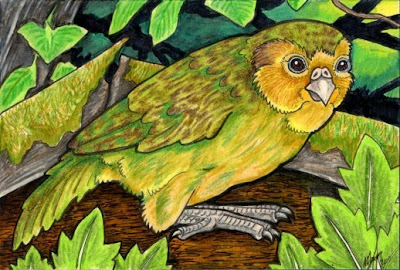 The Kakapo is probably one of our most unusual birds, and certainly one most New Zealanders are familiar with - although very few of us have ever seen one. Kakapo are critically endangered, and being long-lived there were fears for a time that there were no females left at all in Fiordland. Once this large, charasmatic parrot lived the length of the country, then predation and competition reduced its range to the high peaks of Fiordland and finally, now it is essentially Extinct in the Wild with a wild colony being set up on Codfish Island and specialist breeding facilities at secret locations throughout the country to try and breed up their numbers.
Having watched a documentary on these guys "Kakapo - an Unnatural History", I can tell you rather a lot about them.
The Kakapo is a flightless, nocturnal parrot. Its diet consists of native plants, seeds, roots, pollens and sapwood. Although flightless, it does have well developed wings and is an efficient climber, so can glide downwards efficiently. Its legs are sturdy and it has the distinctive bouncing parrot gait and can reach quite a speed, even if it does look most comical doing it.

Kakapo have great personality. They're not afraid of humans - which lead to them being hunted almost to extinction and they also display the curiousity typical of their kin. They are long-lived - it is suspected that they can live to be over 100. The males are also excessively randy. If no females answer their calls, they will try and mate with anything - I have seen footage of one accidentally killing a rather smaller shearwater that came too close to an over excited male. And as most of the world knows, they are also attracted to TV presenters. Most of our Kakapo have constant interaction with humans - even if it is just because they get weighed and examined on a regular basis.

In breeding season, the male makes himself a hollow in the sand and here he crouches and booms for a lady. And booms... In Fiordland, Kakapo were booming, but noone was answering - there were no females left. Because the long, low boom carries far but is hard to pinpioint, he follows this up with some higher-pitched screeches, so that the ladies can find him.

Luckily for the DOC chaps, a second population was found on Stewart Island, a population that included females.

Unluckily, because it was a small population, descended from only a few individuals, it was genetically "cursed" and many of the sperm deformed and chicks weakened due to inbreeding depression. This made some males more desireable genetically, but alas, these were not necessarily the birds that were popular with the rather small selection of "ladies".

If it were not for Don Merton (my hero - because he also saved the Black Robin) and the dedicated and rather obsessive DoC workers, the Kakapo would no longer be with us, and even now its future is uncertain. Long-lived birds do not breed every year and do not double-clutch (lay another clutch if the first is destroyed/dies), both factors responsible for the Black Robins survival. The genetic curse still exists, although with artificial insemination DoC can insure that some hens at least will produce healthy, viable offspring.

As this bird is so totally unique - and such a character, I hope it is one that future generations will be able to learn about with joy, not tragedy.

If you love the Kakapo, check out the DVD "The Unnatural History". You'll laugh, you'll cry and you'll be amazed at the dedication of Don Merton and the other passionate DoC workers. It's not their job - it's their life. And I am so grateful to them for it. We purchased our copy from Arthur's Pass Visitors Centre, but it might be available around town too.
Posted by LemurKat at 6:00 AM