Conservation Week - lest we forget...

This week is Conservation week, and thus I shall be commemerating the occasion by illustrating some of the birds we've lost. Because I'm a day late, I'll introduce you to two today (actually, it started sunday, so I better get cracking!) 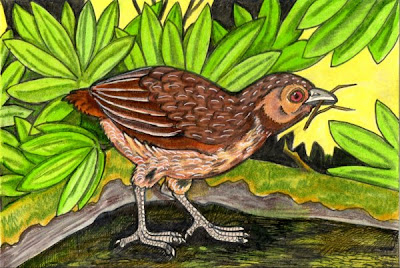 Koreke, the New Zealand Quail
(RIP 1875)
This plump wee quail, similar to an Australian species (the Stubble Quail) was once abundant throughout New Zealand. Unfortunately, a combination of hunting and deforestation sealed its fate. There habitat was predominantly grassland, and they fed on shoots and other plant matter. Like all quails, they spent most of their time on the ground, which made them vulnerable to predation by rats. Their extinction occured before the introduction of mustelid predators to the islands.

There was some excitement in 2007 when quail were found living on an offshore island, but unfortunately DNA testing proved that these were the Australian Stubble Quail - a species which has been introduced here, but may also have occured naturally. They appear very similar in appearance and may be related. 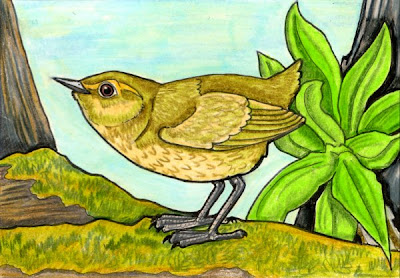 Lyall's Wren
(RIP 1895)
Also known as "Stephen's Island Wren" this bird is infamous because of the tragedy of its extinction. Common legend has that the entire species was wiped out by a single cat. This is not entirely true. This diminutive wren was the last extant flightless passerine and its entire range was limited to a small island in the Cook Strait. It is also the stronghold for tuatara and Hamilton's frog. When the Lighthouse Keeper was put onto the island, he brought with him a cat. One day his cat brought in a small bird - and that was how this species became known to zoologists. They were apparently quite a common sight, hopping amongst the stones and under logs as they hunted for their invertebrate prey. However, their decline was swift when feral cats founs their way to the island. In the year following his arrival in 1898, after the last wren was seen, the new lighthouse keeper shot over 100 feral cats. Deforestation has also been blamed, but Stephen's Island was not heavily deforested until the early 1900s. The only possible positive that came out of this was that Lighthouse Keepers on isolated islands were no longer permitted to keep cats to get rid of the mice. Whether this has saved other species, I do not know. These cats also sealed the fate of the Stephen Island Piopio, a subspecies of our native thrush, which will (sadly) be the subject of tomorrow's post.
Posted by LemurKat at 9:42 PM