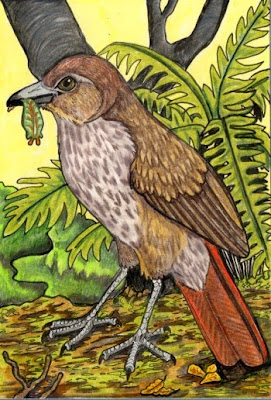 Piopio, the New Zealand Thrush
(RIP 1963)
This charming forest bird is not a thrush at all and was for many years classified in its own family. It is now, however, considered to be related to the bowerbirds and birds of paradise. It was also, reportedly, the best forest songster, with its call consisting of five distinctive bars, repeated in succession then followed by rattling sounds and some mimicry. Regretfully, it is a sound we shall never hear, because the Piopio faced the fate of mammalian predation. By the turn of the last century it was very rare in both the North and South Islands (there being two subspecies) and by 1963 is was declared officially extinct. Its diet was insectivorous, including also berries and it spent a fair amount of time flitting between the forest floor and low tree branches, without engaging in extended flight. It was relatively "tame" meaning that it was unafraid of the human immigrants and thus fell easy prey to their dogs and cats.
Posted by LemurKat at 7:10 AM