Conservation Week - the Price of Fashion 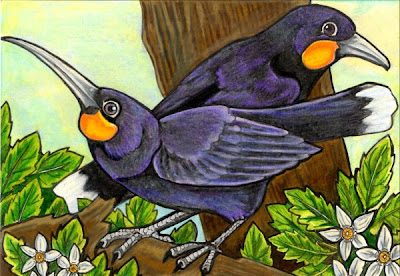 Huia
(RIP 1960)
The Huia is one of three bird species in New Zealand with a unique bill. The female's bill is long and curved, and the male's shorter and sharper. It is thought that this aids in them foraging differently. The male uses his shorter, stubby bill to chisel away at the tree bark, whereas the female uses hers to pluck insects from hollows, like a giant pair of tweezers. Apart from this striking sexual dimorphism, very little is actually known about this beautiful bird, as it was little studied. However, its feathers were greatly prized, particularly the white tipped tail feathers. This bird was considered sacred to the Maori, and only those of very high rank were allowed to wear the feathers. Because of its unusual beak differences, moutned specimans were greatly sought after by museums and private collectors. With rather a lot of profit to be made, the poor huia - already threatened by habitat destruction and mammalian predation, was hunted to extinction. It is one of the ironies, that the rarer something gets, the more desireable it was to shoot, kill and mount them. The tail feathers also became a highly desirable fashion item - worn by the elite Europeans.

And with this, the huia's fate was sealed.

Tomorrow, I think I shall introduce you to an extinctwaterbird.
Posted by LemurKat at 8:33 PM