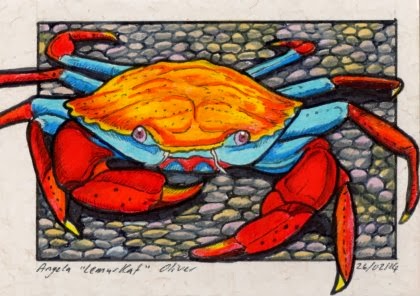 There are numerous and diverse species of Crabs -colonising the ocean, the shore, rivers and even forests. They are characterised by a hard body and five pairs of limbs, the front two of which are developed into chelae (the scientists name for "pincers"). He uses these for defense and also in communication. Due to his leg articulation, it is faster and easier for him to scuttle sideways, but some crabs have been shown to walk forward. He starts life as a free-swimming larvae and undergoes several moults before achieving his adult form. During these moults his old shell softens and another forms underneath, then the old splits and he must crawl out. This is a slow and difficult process, and he may become stuck and perish. He then hides away whilst his new shell stretches and hardens. This colourful chap is known as the "Sally Lightfoot Crab".
Posted by LemurKat at 8:53 AM