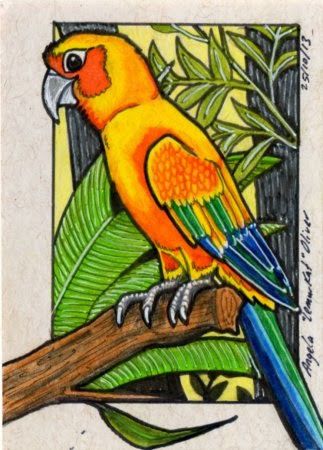 The name "Conure" is given to a number of small parakeet species found in Central and South America. They are noted for their playful and intelligent nature which has, unfortunately, made them popular amongst the pet trade. Although they do readily breed in captivity, populations of wild birds have been decimated with individuals captured and sold to aviculturalists. Once regarded "least concern"; she has now been pushed to "endangered" status and vanished from parts of her former range. In the wild, they gather in flocks of up to 30 members and inhabit coastal and open forest. Her main diet is fruit and seeds. She nests in palm cavities, laying 3-4 round, white eggs. These nests are sometimes targeted by poachers, with the chicks being stolen and hand-reared before being sold as pets.
Posted by LemurKat at 7:19 AM