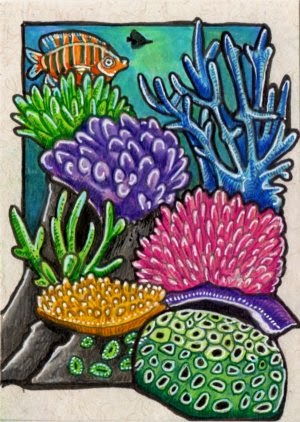 Each Coral is made up of thousands of tiny, genetically identical individuals called polyps. Each measures no more than a few mms in diameter and no more than a few cms in length. These polyps have feeding tentacles, a central mouth opening and a sturdy exoskeleton at their base. When combined into these mighty and colourful colonies they create a larger skeleton. Polyps can reproduce asexually, but during the full moon the various species will undergo a massive spawn, releasing their gametes into the sea for it to drift over to their related (as in same species) neighbours). Coral feed on small things that drift their way - microscopic plankton and even small fish. Like anenomes, they sting it with the tentacles and draw it down into their digestive tract. Coral reefs are under threat from mining, pollution and climate change and over 10% of the global reefs are dead.
Posted by LemurKat at 7:11 AM