I made a rather last minute decision to join this swap, hosted by the lovely Noodlerabbit, with the theme "Animal Orchestra". Now, when the idea to draw lemurs playing traditional Malagasy instruments, it came as a small surprise to me that all the best reference images I found were of bamboo lemurs. As one of the rules was "all animals must be different" I decided to make them three different species, and therefore had to colour them distinctively as well.

So, here's my Bamboo trio:

On the left we have Babata, a Greater Bamboo Lemur playing for us his kabosy.
In the center Rabezoza, a Lac Aloatra Bamboo Lemur blows on his sodina flute.
And on the right Raza, a Western Bamboo Lemur prepares to begin plucking on his valiha.

For more on Malagasy instruments, and how to play them, visit wikipedia:
http://en.wikipedia.org/wiki/Music_of_Madagascar

And finally, as a bonus hostess gift, I would like to introduce you to Fluffy Cottontail. Known as "Flail" to his friends, Fluffy dreams of becoming a famous rock star, perhaps even joining one of his favourite bands (bonus points to anyone who can name them) or playing support for them at a big gig. For now, however, Fluffy must practise in his bed-burrow and hope that his neighbours, the Fuzztail squirrel family, do not complain too loudly about the noise. Here he practises the chords to Jefferson Airplane's "White Rabbit". (Of course, he prefers the Nevermore version).  Being young and naive, he actually believes the song is about rabbits. Another favourite track of his is Heavy Metal Hamsters by Helloween. 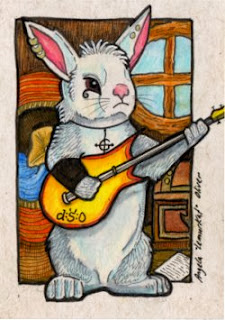