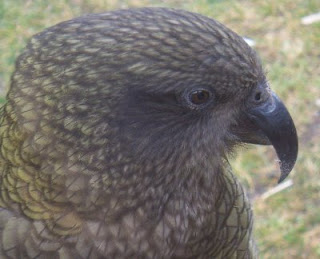 KI-A Ora! I would like to introduce you to my friend Tiriki*. Tiriki is a kea - a unique species of parrot, endemic to New Zealand. Unlike other parrots, kea make their home up in the mountains, spending much of their time above the treeline. Because of this, they have some interesting adaptations. 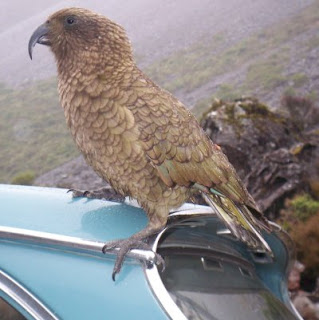 - Kea have a very diverse diet. They eat a huge range of flowers, leaves, roots, shoots and other such things, whilst supplementing their diet with invertebrates, garbage and also meat. They are predators. There is footage of keas eating living sheep and also digging shearwaters out of their nests and killing them. I have not heard of them doing this to rabbits, but wish they jolly well would!
- Kea are VERY intelligent. They can solve puzzles. They get bored. There have been reported instances of them stealing stuff and organising it in a logical fashion (in the reported case - arranging pilfered nails from large to small). They pull apart cars. If you want to see some pretty awesome footage of what these birds are capable of, check out this documentary from Animal Planet.

Tiriki first appeared in "Aroha's Grand Adventure" as part of a gang of three. Juvenile keas hang out in gangs and basically forage, explore and what-not for the first three or so years of their life. When Aroha (a weka) first encounters huim, he has gotten himself trapped inside a house:

A green parrot stared back through the glass at her. His nostrils were bright yellow and his wickedly long beak tap-tap-tapped on the window. He gestured with his head, motioning towards the door. How had he got inside? Aroha pondered. And why? She moved in the direction indicated, and he bounced along beside her, like an erratic, misshapen reflection. He paused before a small square flap set into the window, just beside the door. This was at weka eye-level. The parrot tapped at it, then jumped back. Aroha frowned at him.
“What do you want?” She asked.
He rolled his neck, waving his beak in a half-circle, before rap-rap-rapping on the flap once more.
“Push it!” He squawked, voice muffled by the glass. Aroha stepped forward, tapping her beak against it. It moved, flapping open, then shut again. She pushed it again, putting her head through and lifting one foot to step through herself.
“No!” Cried the parrot. “Stop, stay where you are.” Leaning forward, he slid beneath the slightly raised flap, prying it open further with his head. Squirming through, he hopped out and onto the grass. Aroha stepped back and the flap swung shut with a clunk.
“Free!” He cried, bouncing in circles and flapping its wings. “I'm free! Thank you for saving me.”
“Err, you're welcome,” Aroha was perplexed. “What exactly are you free from?”
“Humans,” he sighed and rolled his head again. “They build a splendid-parrot sized door. So I hop on in. Of course, they'd latched it shut – but ain't no lock nor latch this kea can't match! But what can you say? It only opens one way. So, I was stuck. Plenty of time to run amok! Explored the place from pillar to base. Inside and out. Ate the food. Uprooted the plants. Then I grew bored. No telling when they come back and let me out. Good thing you came along. Elseways I might have been in there till my feathers turned grey. Anyhow,” he hopped forward and gave a bobbing bow. “Kia ora,” he said. “Name's Tiriki. I'm a kea.”

She later has several encounters with him, including a run-in with his gang, but he's the boss - his two companions are only described as one having a spiky crest, and the other being scruffy and unkempt. Neither have been given names yet. Maybe Totoa (reckless) and I should totally name one Kaha (strong). Other possible characters are a golden kea (hen) called Miere (honey) and maybe another called Atamai (intelligent). But I'll spend more time playing with Maori dictionaries and baby names later.

Anyhow, the story will start with Tiriki hanging out with his gang. Whether or not his encounters with Aroha make it into this book has yet to be seen - we'll see how things go.

But here's a little background on Tiriki:
* He was the only chick raised from his clutch - his younger sibling being killed in the nest by a stoat (I have debated whether or not to write this scene, it would be quite a violent way to start the book, and I am not sure if that is a good idea since it is a children's book).
* His gang gets up to lots of mischief - playing a game of "Dare" - where each bird takes turns challenging the other to do something. This may have been what led him to get stuck in the house, but that may also have been his general curiosity.
* At some point Tiriki is going to get captured by DOC and taken into captivity for his bad behaviour.

Personality - Tiriki's not a bad guy - he's just a bit impulsive and has a low regard for mammals - partly due to his sibling's death. He likes to goad cats and dogs, but he draws the line at beating up birds. His two companions (who might be brothers) definitely have a slightly vicious streak. However, Tiriki is the smartest of the three, hence why he is the top of the pecking order. He's intelligent and cocky.

Some things I would like to include:
- a "love interest" - keas are not monogamous, but I am thinking maybe having him strike up a friendship with Atamai - the sibling to his two male friends. And then something bad happens to her - possibly lead poisoning and she is taken away.
- a documentary or movie being filmed on the kea.
- lead poisoning (to highlight one of the causes for kea's decline).
- references to earlier massacres (maybe have a survivor of one - kea can possibly live up to 40 years, but not usually in the wild).
- the unsuitability of keas as pets or house mates.
- their intelligence.
- how special kea are and how we should protect them.
I am undecided about how much of their predatory natures to include.


* Okay, so these are NOT actually Tiriki, and it is highly unlikely that they are even the same kea, both photos having been taken some years apart, but let's just pretend ok?
Posted by LemurKat at 10:26 PM