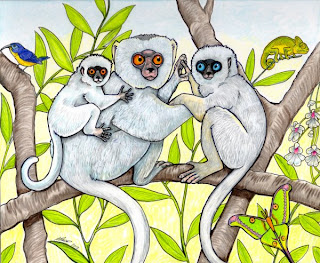 Finally, an image I CAN put in my gallery! This is my silky sifaka family. Well, part of it, anyway (it's missing Mother Aurelia). The lemurs featured here are Ophelia (the adult female), Pierre (her infant son) and Aurelia, her blue-eyed niece whom I should hope most of you would already be familiar with. Also featured are a sunbird, a chameleon and a moon moth.

I made this image to serve two purposes - one of which was for this site: Cycling for sifakas. This fellow, Ivan, is intending to cycle about the South Island of New Zealand, dressed as a silky sifaka, in order to raise money and species awareness. What can I say? If anyone wants to dress up in a white pelt and go biking in the summer, well, I fully endorse that. Anyhow, he asked me if he could use Aurelia's image, and I gave him permission, but was somewhat ashamed at the quality of the scan. I think this one will be much better. Of course, he's not going to have the full body of the lemurs - just the heads and top halves.

The second purpose - other than the reason to draw more lemurs, and possibly to use in my novel, is also to submit it to the Illustrated ATCs calendar.