This is something I hear a lot, and whilst it IS considered complimentary, I actually find it a little irritating, although it is flattering and meant in good nature.

So why does it bother me? Well, it's like saying that my artistic ability was something I was born with - like blonde hair and blue-grey eyes. I wasn't born with the ability to draw, it took a LOT of work. If you, random stranger, could put as much time and effort into drawing as I have, then quite possibly you too could be able to draw like me.


I would like to share some pieces with you now - and beware, they may hurt your eyes. These pieces were drawn at the turn of this century. Now, you might think they were drawn by a child, but I was actually in my 20s at the time: 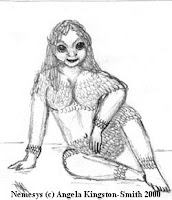 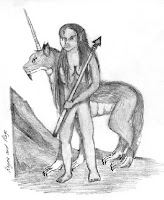 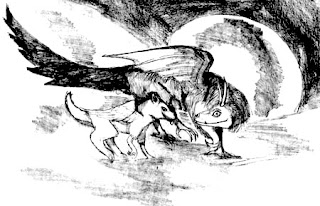 As you can see, I had also not mastered the art of the scanner either. I didn't even own one at that point and had to pop into my friends' places and make use of them - meaning I couldn't fiddle with the settings to try and make them reasonable.

Here's one from 2000 that I am planning on redrawing today: 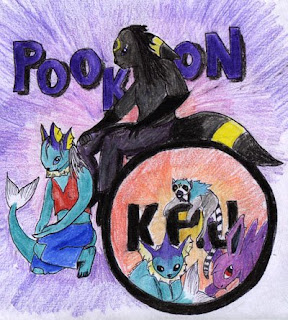 I'm not planning on redrawing all of it - just the two pokemorphs (Azrael and Brooke) because I need a book cover for the story - recently uploaded to Wattpad.

And here it is: 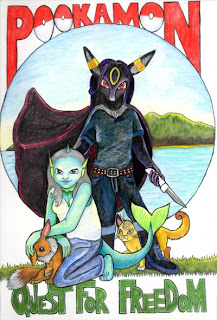 I decided to go with the characters slightly more humanised. Drawing Azrael and not making him look friendly was hard! In the end, I decided I had to omit his mouth altogether. I have realised that designing a black furred/skinned character that dresses in black is a silly idea. Also, I just remembered, I think he has violet eyes. Some editting may be required!  Buttons (the eevee) is my favourite.

After spending the early part of this century drawing Pokemon, I discovered Furries, and become a member of VCL. Which is filled with more painful art, but thanks to drawing furries, I managed to get rather more skilled it drawing the human figure - mostly female, although it did not help whatsoever with human faces, which I am still pretty poor at.

During this time I founded the popular FurArtXchange and FurArtXchange2 livejournal communities. These spawned a large number of "Sister" sites - GryphonXchange, DragonXchange and more. Some of them are still somewhat active, but I have moved on.

I discovered ATCs in 2005 - about the time my interest in Furry waning. My early efforts focused on wildlife and requests, and also I attempted to illustrate every book I read. I was producing art almost every day, and receiving lots of feedback - most of it positive.

Here's the first ATC I ever made (you may have seen this before): 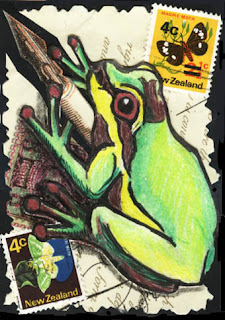 I'm still not much better at drawing frogs!

In 2008 I got back into drawing Pokemon again, showing some marked improvement (this is old, then newer): 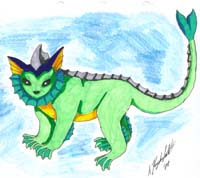 Now, some 3000 art cards and assorted other mail arts later, I actually consider myself pretty decent as an artist, but as you can see - it is not natural talent that got me that far - except perhaps a natural inclination to draw, but practise. Lots and lots of practise. Studying anatomy and reference pictures, looking at colours - some of my early ATCs are pretty well drawn - but the colours are horrendously garish. And lets not even think about my early efforts at digital colouration. There's a reason I gave up on that!

And as for the people that say "I can't even draw a straight line". Well, I have no condolences for you - I can't either. Drawing a straight line is not even related to art - it is just something that requires a ruler or a straight edge. And most of us can locate one of those.

The same applies to writing. Now, I've always been reasonably good at writing - probably due to being extremely well read and having teachers for parents. However, there are many people that say "I've got lots of ideas in my head, and one day I'll write my novel." Well, why not make that day today? Or - at least, November? It's interNational Novel Writing Month again soon and if you're really serious and not just full of hot air, then you'll join me on my fifth or so NaNo journey.