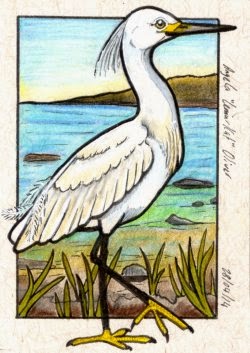 The name Egret is given to members of the Heron Family characterised by the long plumes that they wear for the breeding season. These elegant wading birds are generally white or buff in colour. In the 19th and 20th Century these long and filamentous plumes were in high demand in both the US and Europe, where they were used to adorn hats. Many Egrets and other birds were heavily hunted, with some species being pushed to the brink of extinction. As Egrets don their plumes specifically for breeding, and Egrets are colony nesters, birds were being massacred by the hundreds. Luckily, there were those that wanted to see the trade stop, and Wildlife Refuges were founded across America, to protect the nesting birds. A similar massacre in New Zealand almost wiped out the Kotuku, a subspecies of Great White Egret with only one breeding ground.
Posted by LemurKat at 6:45 AM