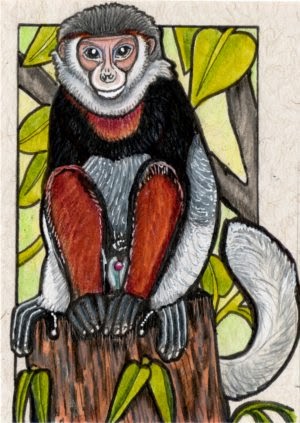 The Douc are a Genus of striking langur monkeys found in Southeast Asia. This fellow is the Red-Shanked species and he is occasionally referred to as the "costumed ape" (although he is not an ape at all). Troops consist of between 4 and 15 members, with up to 50 recorded, and with twice as many females as males. An aerial specialist - the males lead the troops through the treetops, making soaring leaps of up to 6 meters. He is a very expressive monkey, with individuals communicating emotion through facial expression. Gentle and peaceful, the troop gather in the branches to chew on leaves and will share tidbits with one another.
Posted by LemurKat at 6:34 AM