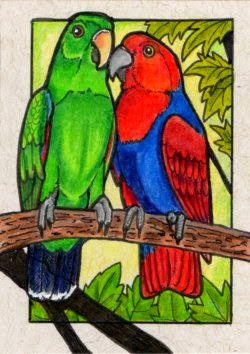 Unusually, at least in the bird world, it is the female Eclectus Parrot that is the most colourful of the pair. With her red and blue colouring, she is so different from her green mate that at first they were considered different species. Eclectus Parrots favour a polyandrous breeding system, that is to say, one female with multiple mates (up to five). She chooses a tree hollow to nest in, and then vigorously defends it from all other females and will remain resident at this tree for up to 11 months, while her mates bring her food. Her bright colouration makes it easy for her males to find her, alerts other females to her presence and renders her difficult to see within the hollows of the tree.
Posted by LemurKat at 8:09 AM