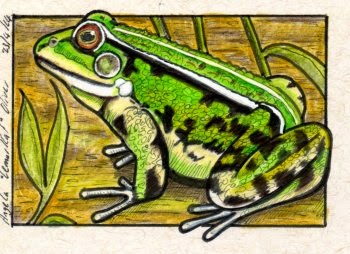 The Edible Frog is a common European frog, named for the role he plays in the food industry, specifically frog legs. He is not a natural species, but in fact a hybrid between two other species: the Pool Frog and the Marsh Frog. These species hybridise naturally and are fertile, but when Edible Frog hybrids breed with one another, the offspring are often malformed. He is spread throughout Europe and active during the day. His main diet consists of insects and other arthropods, but he has been known to engage in cannibalism and will even eat small birds.