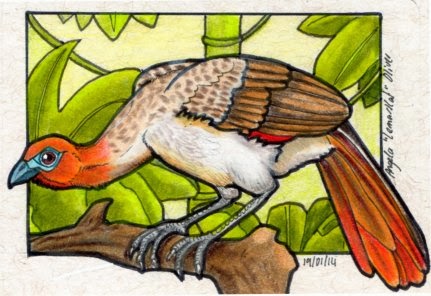 And the prize for the species with the best name goes to this relatively dowdy looking fellow. Indeed, the name is derived from the call of one species: the Plain Chachalaca (to me, he sounds like a demented chicken). This fellow is a Rufous-Headed Chachalaca. The chachalaca are a Genus of Central and South American birds related to the Guans and Currasows, and thus a distant relative of the chicken. He makes his home in woodland, but also has expanded into farmland. Social and noisy, he forages in small flocks of 2-7 birds, mainly on leaves with the occasional fruit or insect consumed. Alas, his range is very small and diminishing due to habitat loss and hunting pressures.