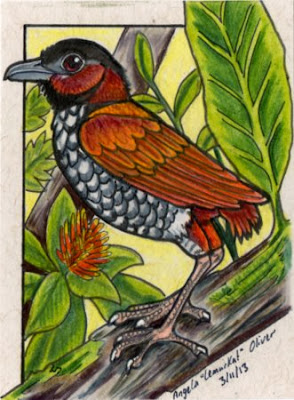 The Antpitta is a relatively small passerine found in the subtropic and tropical regions of South America. This particular species is known as the Black-Crowned Antpitta, for reasons that should be immediately obvious. As his name suggests, he likes to eat invertebrates, and bears a superficial resemblance to the not-closely-related pitta bird. To catch his insect prey, he fossicks about in the leaf litter and hops along the forest floor. Whilst not social with others of his species, he does sometimes hang out near swarms of army ants (which might also explain the name) and will pounce on any prey that they flush out.
Posted by LemurKat at 6:58 AM