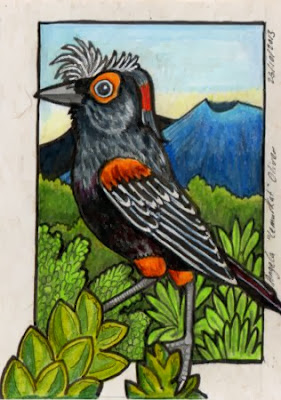 The bogan bird of Hawaii, the Akohekohe sports a bright dyed mullet. He is also known as the Crested Honeycreeper, for reasons which I think you will see are self explanatory.

For a time considered extinct, a population of these birds was rediscovered in 1945 upon the island of Maui, Hawaii. They are still hanging in there - with an estimated population of over 3,000 - but are classified as “critically endangered”.

Like most of the honeycreepers, it is vulnerable to bird malaria and is only found now at higher altitudes, where the lowland mosquito does not survive. Predation by rats and competition with introduced birds have also reduced it to 5% of its original range.

For more information on Hawaiian birds and how you can help the birds of Maui, here’s a website: http://www.mauiforestbirds.org/
Posted by LemurKat at 7:52 AM