How to Make a Queen Bee

This is likely my most ambitious Paper Doll yet - an anthropomorphic bee (which I intend to dress at some point using fabric offcuts, perhaps, or maybe make costumes, like a paper doll).

Thus I thought it prudent to scan each step and turn it into a semi-tutorial. As this doll is also for a Secret Santa, this entry was not published until the package was received and opened.

Tools Required:
* A large piece of paper or sketchbook for prelimenary sketching
* Thinner paper/card for tracing image onto
* Gluestick or xyron machine
* Sharpie
* Scissors
* Colouring pencils
* Sturdy sheet of card
* Split pins/brads/paper fasteners (whatever they're called where you live)
* Sharp piercing device (a sturdy/thick pin or a needle)
* Flexible plastic or thick card to place beneath sharp piercing device 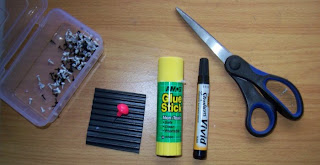 First step: The linework.
Anthro bees are difficult to draw. It took me several attempts and finally finding, firstly, a good reference of the female body, then someone else's rendition of an anthro bee to finally make a passable body structure. For the record, the human figure I used is here and the anthro bee is here.

After you have drawn a basic outline, divide the body up into bits (as showing here by the red lines) and determine the split pin placement. With my current thickness of card, the most pieces each pin can pierce is four. But ultimately, the more parts attached by the same pin, the neater the completed piece will look.

If you wished to be a little less ambitious than me - the neck, wrists and antennae do not need to be articulated. 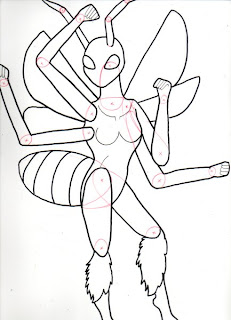 As per many of my recent pieces, she's too big for the scanner, so I have had to cut parts of her off.


Second step: The body parts.
Once the linework has been done and the places of connection and overlap determined, each bit must be traced onto a sheet of paper. I am using simple printer paper - 80 gsm, acid free for this purpose. Now, for something as complicated as this bee - which so far has over 20 different body parts, I decided it was prudent to label each section individually: 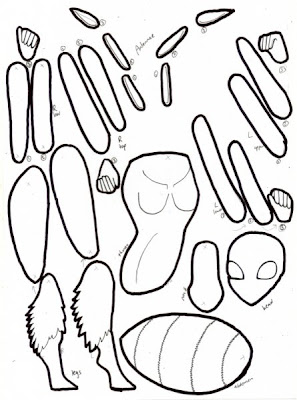 After penciling them, I then outlined in sharpie marker and added details using a finer pen. Ignore the hands for now - I've just realised I put almost all the thumbs on the same side, so that will be remedied!

This bit can be switched with step four, if you would prefer to colour after cutting, but in this case I prefered to colour first, as when paper is glued and the glue has not properly dried, the paper can become more fragile and tear more easily. Plus glue interferes with the laying on of coloured pencil. The drawbacks with colouring first is that markings may not continue through body parts so succesfully, and also you may waste time colouring bits that you cannot see anyway. The former isn't a problem with this lass, because she's going to be golden and black all the way through. 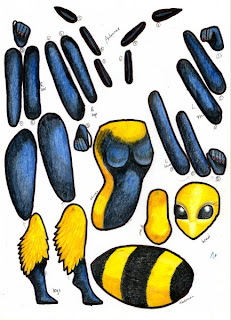 Now, for my colouring, I add shadows and highlights, using blue with black (purple works well too) and tan with the golden yellow.

You may have noticed I haven't done the wings yet. I shall leave them til last. It would be nice if I could find something suitably translucent for them.

This is the tedious and messy bit - cutting out each of the individual pieces, gluing them to card and then cutting them out again. Here is where a xyron machine would be awesome. Alas, I lack such tools and must rely on my gluestick and a fine pair of scissors.

After the tedious process of cutting out, I recommend that you take up your sharpie and run it around the edges again, covering any pieces of cardboard that may be overhanging the paper. Also, keep the parts of the limbs etc together, so you don't end up getting confused with which hand belongs to which forearm and which bit is the forearm. If you do get stuck, refer back to the original sketch, as lying the piece down on that will give an indication of which one it is. 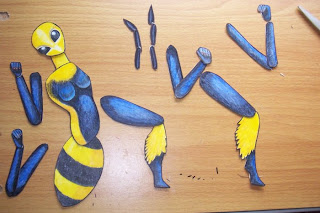 Step five: Piercing the joints
Due to the complexity of my Bee Queen, I start by assembling the limbs. The piercing part is simple - you simply place the pieces on the mat, with one above the other, and stab in the pin at the appropriate point, once the holes have been made, simply thread the split pins through and flatten out their prongs. Try to match the colours of the pins with the colour on the card to best disguise them. My bee requires 23 split pins. The wings, when I make them, shall be attached using the same ones that affix the arms. 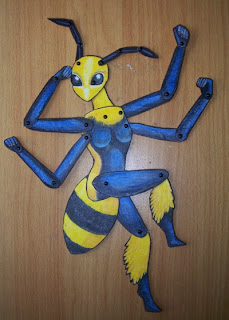 Step six: The wings
The wings were easy to make - once I found some clear plastic in the form of shrink plastic (bought years ago, but never got around to using). They were a cinch to trace - being transparent and all, and then I just used a marker to add a bit of detailing. The holes were harder to punch than through card, but she is now fully completed. 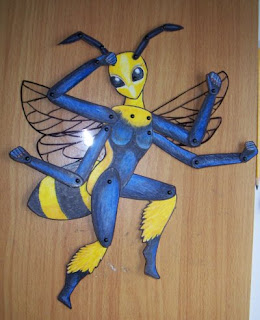 I also designed a dress and headband for her - but forgot to photograph the final or take scans during the process. Oops...
Posted by LemurKat at 1:16 PM

That is a very cool paper doll. :D Good job!

Wow, this is so cool! I didn't realize you were making paper dolls now.