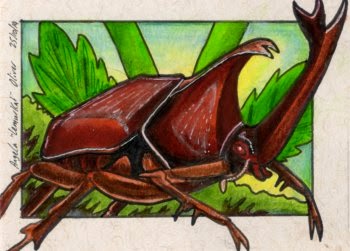 The Kabutomushi is a Japanese rhinocerous beetle. It is readily available in the pet trade - there are even entire stores dedicated to them and other large beetles. The large male using his distinctive horn to fight with other males, and this trait has been exploited in gambling dens. Two males are placed on a log, and the first to push the other off is deemed the winner. For all his popularity, these beetles are short-lived, spending the majority of their life in larval form and only surviving in their adult stage for around four months. His diet is vegetarian, particularly fruit, and he is capable of flight.

Kabuto translates as "helmet" and Mushi as "bug".
Posted by LemurKat at 8:17 PM