Today is the ONE YEAR ANNIVERSARY of my "Animal-a-Day" project.
As you can see, the numbers do not *quite* add up, we should be on 365, but due to my April Fool's 'Dropbear' card, plus a two-day hiatus between Christmas and New Year, it has been an entire year of drawing and presenting an Animal-a-Day practically every day. And what a journey it has been - some days I have been organised in advance, but on at least one occasion I was racing to get the picture finished and uploaded before midnight! 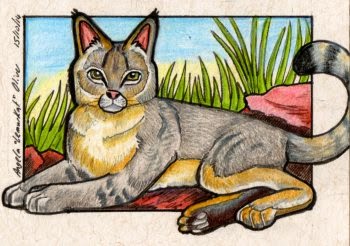 The Jungle Cat is something of a misnomer for this fine feline, for she does not live in the jungle. Instead she makes her home in savannah, open dry forest and marsh lands, which leads to her other name the "swamp lynx". She is the largest of the living Felis species, standing about 36 cm tall. Her range covers southern Asia, from Egypt to Vietnam. She is solitary in nature, preying mainly on small rodents and birds. These she captures by making high leaps from the reeds and snatching them from the air. This species has been successfully crossed with domestic cats, producing the "chausie" breed. However, she is very much a wild cat and even if captured young, Jungle Cats are very difficult to tame.

Congrats on your endeavor! You set yourself a big challenge, but you've powered through and created an awesome body of work.