Getting sick of lemurs yet? 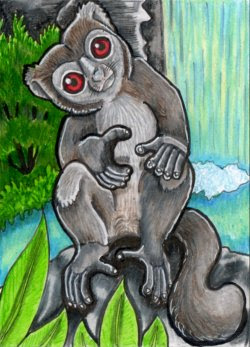 Little Grey is a varibolomadinik. Or as we say it "Western Gentle Lemur" (or "bamboo lemur"). The other bamboo lemur species live on the east coast of Madagascar, and the western gentles are only found in small pockets on the west. Why so small? Because they have a fairly limited diet - they are the pandas of the lemur world, that is to say, they eat bamboo.

This young lemur lived with his mother, aunt and his cousins near a small waterfall. That is until the day the varijatsy bandits came along (you'll meet one of them later). Then, his mother was viciously murdered and he was kitnapped and taken north, to be sold into slavery. Rather traumatised by these events, he is a melancholy fellow. He is friendly enough to his fellow captives, but happens to be quite shy. However, he does have something they do not - knowledge of the forest that they manage to escape into.

Overall, his fur is a greyish-brown, with his belly being more grey and his back having more hints of brown. His face is grey and his eyes are deep red. He has a relatively flat head, and tufted ears. His muzzle is shorter than the Eulemur species, and he is small in size.

He has not yet had much of a role to play in the story.

Hrm, I think I might be a bit burned out of drawing lemurs. Maybe I'll switch back to birds for a time. Or hedgehogs. Anyone fancy hedgehogs?
Posted by LemurKat at 6:22 PM