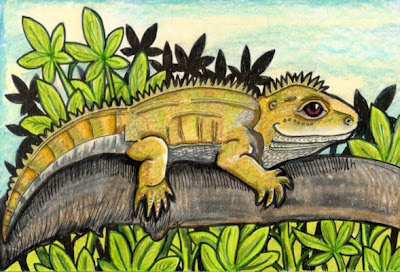 Not a lizard, but a reptile harking back from the time of the dinosaurs, the Tuatara is another relic of New Zealand. The adults are nocturnal, the youngsters diurnal. This is a survival mechanism because tuatara are not particularly picky eaters - but they do eat meat (eggs and ubsects), and they don't turn their nose up at eating smaller members of their own species. They are long-lived - some known species are approaching 100 years old - or older, and slow breeders. For example, Henry, a famous captive tuatara, has now beconme a father for the very first time. Aged 111. They only reproduce every 2-5 years, if that. This makes them vulnerable to predation, as they don't breed fast enough to restock the population. Also they are affected by temperature changes - the higher the temperature, the more males are hatched, so if climate change is on the rise, then the tuatara will be on the decline. Through captive breeding, this ratio can be somewhat monitored and controlled. Tuataras live in burrows, coming out at night to forage. They have been known to share with burrowing petrels, although whether this is of benefit to the bird is uncertain. Since tuataras do like meat, and are partial to eggs, it is probably not the best living arrangement and the petrel would be best to move out and find a new home. 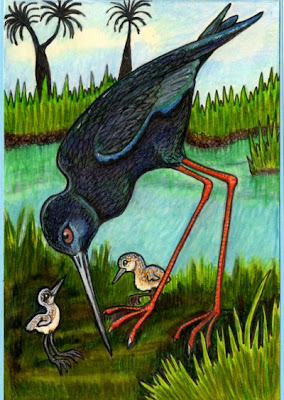 The Kaki or Black Stilt is a very rare wading bird. Once widespread across New Zealand, it is now limited to only one breeding ground - in the riverbed near Twizel. Conservation efforts have meant that a large fence has been erected around this area, allowing the birds to fly in and out but keeping the area clear of mammalian predators. At present there are not many more than 7 breeding pairs, captive breeding is involved to help boost their numbers. As there are many more make black stilts than females, the male Kaki will often seek out a Poaka - a pied stilt, for breeding. These hybrids are fertile, but have low survival rates. Kaki prod around the riverbed rocks and in the mud for tasty invertebrates to gobble down. They are solitary breeders, and when the young hatch they are precocious and active, swiftly able to hunt for themselves, under the watchful eyes of their parents. 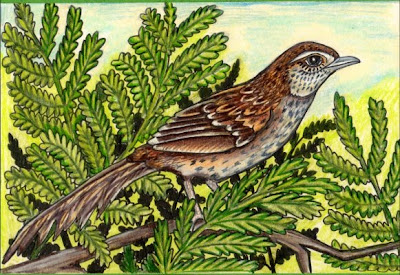 The Kotata or Fernbird, as it is named, is a diminutive, reclusive fringe forest dweller. More often heard than seen, it is not uncommon, but yet one of our lesser known species. Named "Fernbird" for its distinctive droopy, fernlike tail, rather than its habitat, it lives and breeds in sedge, near water. Inoculous, and relatively small, it prefers not to fly and will hop along the ground to travel. Not that it tends to move far from home, at any rate. It nests close to the ground, making a little cup nest. This is of course vulnerable to rats, and the Kotata is also threatened by habitat destruction. Maori revered this wee chap as an oracle and interpreted its calls to decide whether their daily ventures would be succesful or fail. They have also used them to portend disaster. I have been on several fernbird hunts, including a most noteable one in Totaranui (where I stumbled upon them accidentally) and find them charming fellows.
Posted by LemurKat at 7:26 AM

Oh I love the first one.. Great Job !