I have had issues with my recent pieces. Both a combination of lack-of-inspiration and lack-of-skill at the particular subject.

So here we have, first off, my rendition of Kuchiki Byakuya, a character from Bleach. Drawn for a lass in Macedonia whom I hope likes him despite the fact that I can't draw anime to save myself: 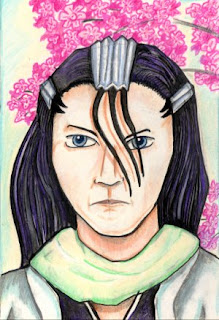 Although I do feel that for a human character, I didn't do too terrible a job. It's a bit... blah, however.

Now for another couple of blah pieces. I'm not sure if it is because I've drawn these characters on several occasions already or because I overdid the furry thing back in the early part of this century, but being required to draw not one but two seperate anthro felines failed to inspire me. I hope it doesn't show too much in the pieces, although it possibly explains why they are quite similar in pose: 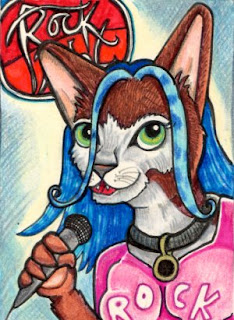 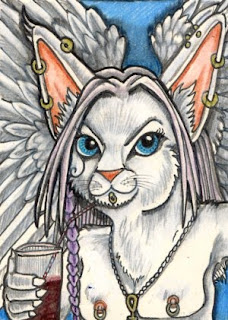 Misty Kitty is taking the stage in "Rock Idol" - a fictional Reality TV show and Icekat with his overindulgence of piercings is enjoying a chocolate milkshake.

And finally, a piece I did some time ago but forgot to upload: 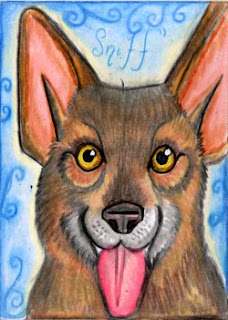 This is Sniff, Sniff was an (anamatronic) Alsatian dog that used to appear on television with his human, Constable Keith. Together, they would teach us children about such things as Stranger Danger and Not to Play with Fire and otherwise keep ourselves safe. This particular card was made for a wee lass in Sri Lanka. Her father was supposed to be sending me a photo of their dog (so I could draw it), but never did, however I managed to get a description of her - and decided Sniff looked enough like her to engage the daughter's attention. She liked it ^^ I got a sweet note back via her father.
Posted by LemurKat at 1:54 PM