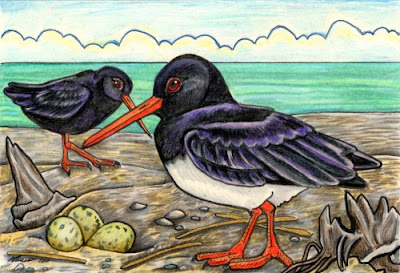 There are two species of oystercatcher to be found in New Zealand. The South Island Pied (which also lives in the North Island, but doesn't breed there) and this fellow, the Variable Oystercatcher. Anyone who frequently beach walks should be familiar with these striking black and white (or just black) birds, and their strident alarm calls are a frequent sound. There are two colour morphs to the Variable - the pied and the pure black. Pied Variables can be distinguished from the SIPO by the less distinct band between the black and the white, which on the SIPO runs up the bird's shoulder as well. They are also slightly larger. Pure black birds are more common in the South Island than the North, but this speices is widespread across both. It favours a coastal habitat and is not found inland, although will forage in pasture that borders the coast.

The name "oystercatcher" comes from his diet, which includes molluscs - although not oysters, which he places upright in the sand and then pries open with his bill, or if that doesn't work, he'll hammer it open. He also enjoys marine worms, crabs and occasionally even small fish. When catching marine worms, he fishes them from their burrow with that long, useful bill and then might choose to rinse it off in water before gulping it down.

In winter, oystercatchers gather in flocks of 50 or more, but during spring they pair off and establish their own territory. This they defend by performing noisy "piping dances" - bowing their heads and running with short, quick steps and calling in high-pitched trills that slowly die away. The nest is a scrape in the sand, usually near rocks, driftwood or some sort of cover and in this are laid two or three cryptically coloured eggs. Chicks are able to leave the nest at two days old but remain with their parents for some time. Both adults and chicks are capable of swimming for short distances if required and if danger threatens, they prefer to run rather than to take flight.

Whilst the SIPO is a subspecies of the Pied Oystercatcher, found in other parts of the world, the Variable is found only in New Zealand.
Posted by LemurKat at 5:23 PM