When I was young, I had a My Little Pony - in fact I had three, and I still have them (Skyflier, Bowtie and Baby Ribbon). And it seems that ever since the 80s, My Little Pony has still been around, recently coming to the forefront again with the new series "Friendship is Magic." It is oddly addictive. Anyhow, I allowed myself to be lured into a "My Little Pony" themed ATC swap, and decided to draw some of the characters.

But I just couldn't get the new design right - these new hydrocephilic cat-horses just do not look right when I try and replicate them. So, with a resigned sigh, I pulled down and dusted off Skyflier (back from G1, when MLP actually looked like horses) and used her as a model. More-or-less. 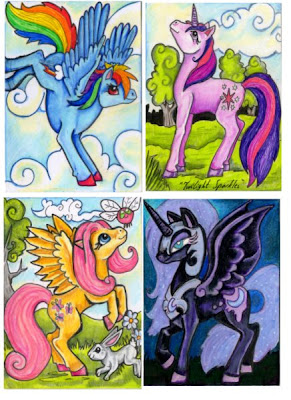 Rainbow Dash is the favourite of the swap hostess (although I'm not so fond of her myself), Twilight Sparkles is one of my favourite characters (cos she's a bit like me), Fluttershy is cute but so, so timid! And Nightmare Moon was just a nifty design.

I might draw Pinkie Pie, who is my other favourite character, at a later date. And because I've drawn two pegasus and one unicorn but no earth pony!

I was told I was not allowed to design my own pony for the swap - she wanted "real" ponies only, but I could not resist drawing up my Kat pony for the backing:

Her cutie mark is a book, of course. I have Rose Moonfeather to thank for the original design of the LemurKat pony.
Posted by LemurKat at 5:14 PM

I really love the Kat pony. :)