Another little fish with a big name. 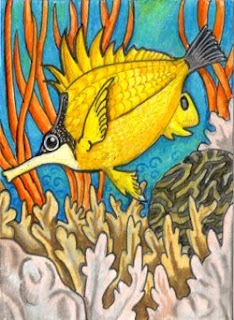 The Longnose Butterfly Fish, a beautiful little pisces that I saw both in Hawaii and the Great Barrier Reef. These fellows are usually seen in pairs and they form monogamous bonds. Also known as the "forceps fish" they use their long snouts to pluck tasty worms and other invertebrates from the coral reef or stony floor.

The Hawaiian name - Lau-wiliwili-nukunuku-'oi'oi - translates as "long nosed fish shaped like a wiliwili leaf". I am guessing "nukunuku" means "nose" because it is also part of my other favourite reef fish - humuhumuunukunukuapua'a (which means "colourful fish with a pig's nose" or some-such).
Posted by LemurKat at 11:43 AM

Labels: atc, fish, under the sea

This is gorgeous. Love the details on the fish and the foreground. Beautiful!