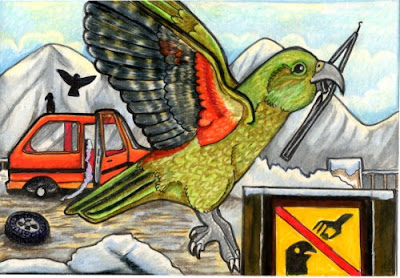 This fellow has been sitting in my "Inked but uncoloured" pile for a bout a month, and since it is rather awesome, I thought it high time I finished it up.

Meet the Kea, the only alpine parrot in the world and a real smart and cheeky character. Found only in New Zealand, the Kea makes his home above the treeline and often gathers in small flocks. They have an omnivourous diet, enjoying roots, shoots, berries, fruits as well as insects, reptiles, eggs, other invertebrates, carrion. Basically, they will eat almost anything and are noted for scavenging around alpine villages and ski resorts. Another nasty habit was to descend on snow-bogged sheep and peck through the wool above the rump to literally eat them alive. This act, although not immediately fatal, ultimately results in infection, fly-blotting and death. It also demonstrates quite how smart these parrots are to locate this rich food source. However, farmers did not appreciate this demonstration of smarts, and the kea suddenly found itself persecuted and shot. Since this was a learned behaviour, and only a few keas actually practised it, many innocent birds were executed. They have also been seen to hunt burrowing birds, specifically shearwaters, extracting the babies from their burrows to kill and eat them. Hopefully it also does the same with rabbits.

Keas are now considered vulnerable, if not in fact endangered, and are fully protected.

Keas are also noted for their insatiable curiousity and groups of them like to hang out around ski-fields where they scavenge for food and try their hand at amateur mechanics by dismantling cars. They particuarly like the rubber around windows and also windscreen wipers and aerials. When not causing trouble, keas are generally foraging for food. Indeed, it is only in those areas where they no longer have to hunt high and low - ie: areas with lots of human rubbish, that they have the time and energy to devote to destructive behaviour. Much like teenagers or children - keep them busy and they'll behave. Hence the large number of "Do Not Feed the Kea" signs that are often ignored.

They are hole nesters, using hollows under rocks and dug burrows, as well as descending below the tree line to make use of beech trees. Males often court and support several females, and travel frequently between their nests. Keas are highly sociable birds, and will "pay visits" to others of their flock. Lone birds do poorly in captivity, and often develop bonds with humans.

In studies to determine the intelligence of various non-primate animals, the kea came out tops in learned behaviour - they are capable of solving puzzles and devising solutions. This is one of their best surivival traits, but also - alas, one of their most maligned.
Posted by LemurKat at 6:27 AM