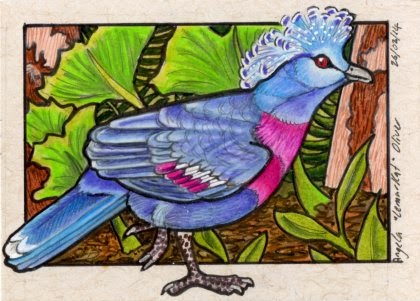 With her regal appearance and proud crest of feathers, the Crowned Pigeon is a handsome bird. There are three species, all of whom are found in the Papua New Guinea region. She is the largest extant pigeon and is believed to be related to the dodo. Whilst quite capable of flight, she leads a terrestrial existence, foraging on the forest floor for fallen fruits, seeds and snails. She is sociable, and will hang out in small flocks. If disturbed, she takes flight directly up, into the trees, where she remains until the danger has passed, motionless except for the occasional flick of her tail or low, cooing call to her fellows.