Today was the first day* I did not reach the requisite 1665 words. Not a big deal since I am well ahead on the wordcount (since if I were just doing the requisite minimum/day I would have achieved only 9900 by now).

So, why did I not succeed, may you ask?

Well, the plot's a little slow moving at the moment. I'm basically just writing scene-stuff and the "journey" and I'm also pretty tired. In one story thread, Aurelia and six other lemurs (including Constance, her rival) are traipsing across the Tsingy to visit a refugee camp. In the other story thread, Rakoto is about to be shown the underbelly of Narivo by his tutor, Mephistopheles. Mephi's species as not yet been identified - I wonder if any reader would have noticed that? There's hints and vague descriptions of parts of him (his fur, his fingers, his ears, his eyes) but I have never yet said "the aiay".

Today was also the first day back at work after my week holiday. Now, sundays are always quite tiring - as there are only ever 4 staff members on sundays and although we are not a particularly busy store, sunday can be busy - usually depending on the weather. Today the weather was actually beautiful, but we still have quite a few customers.

Also, sunday is also the day the new My Little Pony episode is uploaded.
Yeh, I'm a MLP fan.

And lastly, my mother rang. I can't write and talk at the same time, but I can draw and/or colour, so I finished up this image of Snoshti: 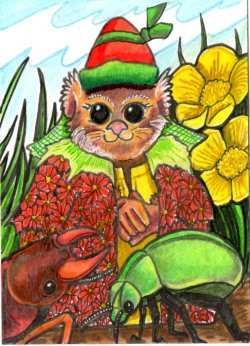 She's a Hedge Imp from the most excellent "Dreamdark: Blackbringer" by the amazing, the awesome, the imaginative, Laini Taylor.

And here's a random picture of my book cases: 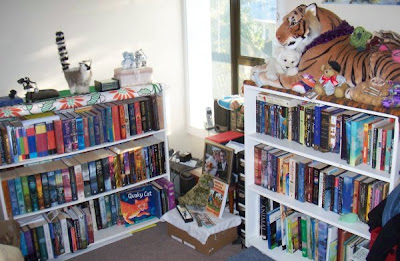 Now mostly organised after the earthquakes - and stacked two deep with the ones in back being piled flat, top to bottom of the shelf. I put the pretty ones in the front!

Anyhow, to bed! Tomorrow i must be up with the birds (5am) because now I'm back at work it's time to get back into the pattern of 1000 words before breakfast.

* except for that day when I deleted about 500 words and then had to use the today's wordcount - yesterday's wordcount to work out my total - I had also written as much I'd deleted.
Posted by LemurKat at 9:48 PM