I've lived in Christchurch for around 18 years. We moved here in 1993, the year after the so-called "big snow of 1992" which was the regions heaviest in 30 years. It was so bad that they lost power, many farmers lost their sheep and an ice-skating rink's roof collapsed under the snow fall.

So, although we've had patchy snow some winters, the last time we had real, genuine, stick-around-and-make driving-hazardous was about four years ago when I lived at my old flat. It melted during the day and turned to slush.

Today has trumped that. I woke up early to the eerie orange-white glow of fluroescent lights reflecting off the snow. Outside the world was transformed by white. After a quick check of my car:

... I decided that backing out the long driveway would probably result in me running into a wall and I didn't fancy shovelling the whole thing only to skid on slippery, pot-holed* roads. So I thought I'd catch the bus.

No buses - so I decided to walk.

Now, I've walked to work on numerous occasions - it's a 5-6 km walk partly through Hagley Park. But walking in the dark and the snow was a surreal experience. For one thing, the streets were so quiet - a few inchworming cars slushed past me, and one bold cyclist, but the world was like a desolate white wonderland. The piles of bricks, the broken houses, all covered in a shroud of snow. My broken city had been painted in beautiful hues. Halfway there, I "picked up" one of my co-workers and we walked through the park together. Haunting and beautiful - the black of the bare trees a stark contrast against the white of the snow. We passed a lone skiier, taking advantage of the large stretch of (at that point) pristine snow. During the last stretch, we hit a full-on blizzard, which was not pleasant.

Arriving at work, there were not enough to run the business, and with fears of worse weather to come, we decided to remain closed. And thus we began the long walk home.

It was actually fun - the first half at any rate. Snowmen were being constructed by the sides of the road, and snowball fights - I even copped one from a passing car. Children out playing on snowboards. We watched a few people get stuck in the snow, and require a push and I was indeed grateful that I had not driven. After leaving my companion, things got worse. The snow started coasting down and the footpath was about 15cm deep - slippery and treacherous. By now my body temperature had melted the snow on my clothing and I was soaked as well. I struggled on, afraid to stop and finally, thankfully reached home and a change of clothes.

You can see how deep the snow was by this picture of our backyard table:

But, Hagley Park was beautiful.

But will I walk to work in ankle deep snow again? Well maybe when... 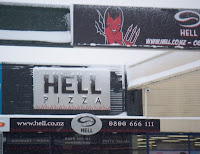 * to be fair, most of the potholes have now be filled in, but the roads still dip and rise unexpectedly
Posted by LemurKat at 12:52 PM